To me, a favourite recipe isn’t always one that stays the same from when you first try it, but one that develops and changes over time. It might be because you just think it can be better, whether it’s the texture, taste or nutritional content or because you had to change it because you didn’t have everything you needed at hand. This Freekeh Three Seed Bread recipe is an example of the latter.

It started when we, (the cafe I worked in) were out of wheat-berries for a bread recipe; I thought I’d try freekeh instead because it was the closest thing I had to wheat-berries. Freekeh turned out to be a complete fail as a substitute for wheat-berries at the time, but it was the starting point for a new bread; a moist, seedy bread with a lovely texture.

Now that I’m hosting guests in our home, the most recent change has been to replace the buttermilk, making it WFPB and vegan-friendly. A straight swap for non-diary milk didn’t produce the same type of loaf, but with a little more experimentation I found that a combination of oat milk and lemon juice has worked really well as a buttermilk substitute.

As this bread dough is very wet I would advise using a mixer. Of course, it could be done by hand but it is very messy, hard to handle and very time consuming. Some bread making experience is probably best, though it is quite hard to make a loaf that is totally inedible (though not impossible).

To dwell on the “experience” aspect for a moment – I thought I’d have this recipe ready to go (tested and foolproof) two months ago. Moving countries/homes, changing brands (yeast and flour), and changing climate had a huge impact on the original recipe. Making bread is a process of dealing with a living,  changing, thing. Many variables can throw spanners (and even monkey wrenches) into the works – keep detailed notes when altering any recipe because you’ll want to be able to keep track of what changes work and which ones don’t. (This really is what the professionals do.)

I tend to make one large and one small, which suits the family and guests for a few days.

300ml (approx) cool water, if the mix is too dry it will be crumbly and difficult to cut.

Using a pot with a lid, add the freekeh and 500ml of cold water and bring to a boil. Once boiling, reduce to a simmer and put on the lid. Cook until the water is nearly all absorbed and turn off the heat. (This is the same method you’d use to cook rice by the absorption method.) Leave the lid on and let it cool before using it.  The freekeh needs to be cool before using, otherwise it can kill the yeast.

This can be done earlier in the day or days beforehand. Measured portions of cooked freekeh can be frozen for later use.

Combine the oat milk and lemon, set aside.

Add all dry ingredients to the mixer bowl with the cooled cooked freekeh. Keep yeast and salt on opposite sides so the salt doesn’t kill the yeast.

Using a dough hook start on a slow speed,  gradually pour in the oat milk/lemon mix followed by the water. Check after a few minutes that the ingredients at the bottom of the bowl are incorporated into the mix.

Mix for 5 minutes, then increase speed for another 8-10 minutes. At this point check how the gluten strands are developing. Unlike many bread recipes, you can’t easily do the windowpane test easily to check if it’s ready.

When you lift up the dough hook you will be able to see the structure has changed. The dough in the bowl and the dough on the hook should remain joined. It is elastic and doesn’t break easily when ready (see photo below).

Cover the bowl with a towel or clingfilm and set aside to let the bread prove. It needs to double in size, roughly an hour, this depends on the temperature of your kitchen (see photos above).

Lightly flour your clean bench and hands and scrape dough from bowl, it should hold its shape and deflate slightly.

Shape into loaves and put in tins to prove again, it should roughly double again.  You won’t need to oil a good quality tin. Cover set aside. Pre-heat your oven to 220ºC. When the bread looks nicely risen (picture above), your finger should leave an indent when you poke it (and not bounce back), it is now ready to bake in your preheated oven.

Bake at 220ºC for 10 minutes then reduce heat to 200ºC and bake for approximately 40 minutes, turn down the oven further if you need to bake it longer.

Remove from the tin as soon as the loaves are baked otherwise the bottom will become soggy. Cool on a baking rack. For a soft crust and to keep the bread moist, seal in an airtight bag or container and store in the fridge once cool. If you prefer a crusty loaf, wrap in a clean tea towel and keep in your bread bin.

This bread freezes really well and will also keep in the fridge for at least 5 days. 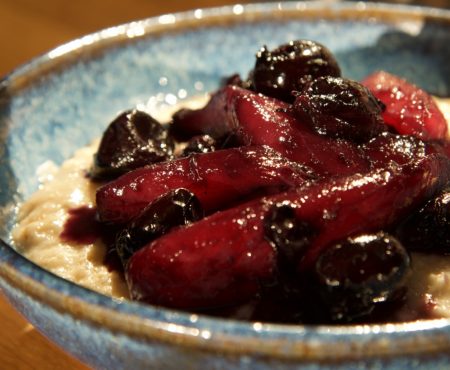